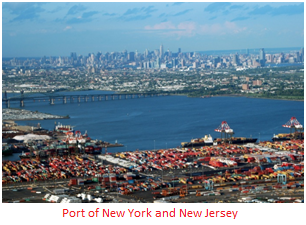 The Supreme Court on Tuesday 21 June agreed to decide whether New Jersey can unilaterally pull out of a bistate crime-fighting agency it has operated with New York for decades.

New York state officials in March asked the court to stop New Jersey from withdrawing from the Waterfront Commission of New York Harbor, a regulator set up almost 70 years ago to fight organized crime on the docks at the Port of New York and New Jersey.

The court promptly blocked New Jersey from pulling out of the agency while it considered New York’s request. In a brief written order Tuesday, the justices agreed to take the case and asked the two sides to submit written arguments this summer and fall.

A spokesman for New Jersey Gov. Phil Murphy, a Democrat, said his state looks forward to being able to withdraw from the agency and “to reclaim authority over its ports with a regulatory structure more suited for the 21st century.”

New York and New Jersey established the commission in 1953 to root out corruption and violence immortalized in the 1954 movie “On the Waterfront.”

Organized crime remains a significant threat on the docks

In recent decades, the commission has expanded its authority to include diversity in hiring for trades that it says are still dominated by a white, male workforce. The commission also continues to aid in prosecutions. Last year, in a related case, the U.S. attorney’s office for the Southern District of New York said that organized crime remains a significant threat on the docks. It praised the commission for its intelligence gathering and investigative assistance.

During the last 50 years, most of the port’s cargo-handling activity has shifted from the piers of New York City to large container terminals in New Jersey.

New Jersey officials say the commission has outlived its usefulness

New Jersey officials say the commission has outlived its usefulness and that it stifles the port’s ability to grow because it constrains hiring. They are supported by the International Longshoremen’s Association, which represents unionized dockworkers, and the New York Shipping Association, which represents operators of the port’s container terminals.

New York Gov. Kathy Hochul and Ms. James, both Democrats, have said New Jersey’s withdrawal would lead to an increase in criminal activity, higher shipping costs and racial and gender inequities in hiring.