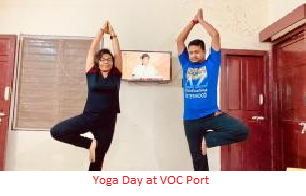 Eighth International Yoga Day 2022, was observed at VOC Port, Tuticorin by organizing Yoga demonstrations at three locations under the theme "Yoga for Humanity".

The event was graced by Chairman of the Port T.K. Ramachandran,
Deputy Chairman Bimal Kumar Jha, and Heads of the Departments.
The Chairman also distributed the prizes to the winners of drawing competition conducted during the Curtain raiser to the International Yoga Day 2022. Sadhvi Jyothiswaroopini, from The Art of Living, gave a lecture and demonstrated Yoga practices to the officers and staff of the Port..

Addressing the gathering, Mr. Ramachandran, stated that “this year’s celebration holds special significance, as the country is also celebrating its 75th year of Independence. He also stated that the practice of Yoga should be part and parcel of every one’s daily routine to achieve the goal of a fit and healthy India”.

V.O. Chidamabaranar Port had also organized Yoga lectures and demonstrations at the Port through ‘The Art of Living’.

In addition, drawing competition for school students was held.