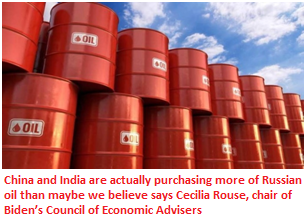 China and India may be buying more Russian oil than known, says US

The price of West Texas Intermediate crude has fallen to just over $105 from more than $122 earlier this month -- raising hopes that pressures may ease at the gas pump.

India and other Asian nations are becoming an increasingly vital source of oil revenues for Moscow as the U.S. and other Western countries cut their energy imports from Russia in line with sanctions over its war on Ukraine.

China and India may be buying more Russian oil than the US previously believed, easing a supply crunch in global markets and potentially driving a recent price decline, one of President Joe Biden’s economic advisers said.

The price of West Texas Intermediate crude has fallen to just over $105 from more than $122 earlier this month -- raising hopes that pressures may ease at the gas pump.

While China is emerging as the only market for crude shipped from ports on Russia’s Pacific coast, India has rapidly become the largest purchaser of barrels loaded at ports on its western shores

Almost 860,000 barrels a day of crude were loaded onto tankers at Russia’s western export terminals in the week to June 10 before heading to destinations in Asia.

“Right now, in particular, oil markets are rather volatile,” Cecilia Rouse, chair of Biden’s Council of Economic Advisers, said Wednesday 22 June in an interview with Bloomberg Television. “I’ve heard part of the explanation is that China and India are actually purchasing more of Russian oil than maybe we believe, so that there’s more supply on the market.”

Rouse spoke after Biden called on Congress to suspend the federal gasoline tax, which is 18 cents per gallon, for three months in a bid to deliver consumers some relief. Rouse said she hopes the global price dip is passed on to consumers but that long-term challenges remain.