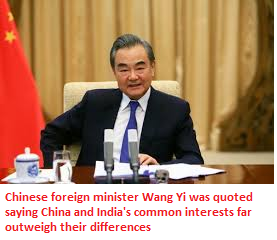 India and China should meet each other half way to push the bilateral relations back onto track of stable and health development at an early date, jointly address various global challenges and safeguard the common interest of both the country as well as the vast number of developing countries Chinese foreign minister Wang Yi said.

The Chinese foreign ministry statement on Indian envoy Mr Rawat’s meeting with Mr Wang, quoted Wang as saying that China and India's common interests far outweigh their differences, adding that the two sides should support rather than undermine each other, strengthen cooperation rather than guard against each other, and enhance mutual trust rather than be suspicious of each other.

This was Rawat’s first meeting with Wang after he took charge as India’s new envoy to Beijing in March. The meeting, which took place  assumed significance as it came ahead of the 14th BRICS summit.

Mr Wang called on both sides to adhere to the important strategic consensus reached by the leaders of the two countries, insist on placing the border issue in a proper position within bilateral ties, and seek solutions through dialogue and consultation.

China and India should also give full play to their traditional advantages in people-to-people and cultural exchanges, continuously expand mutually beneficial cooperation, and work together to create a better future for mankind, the state-run Xinhua news agency quoted Wang as saying.