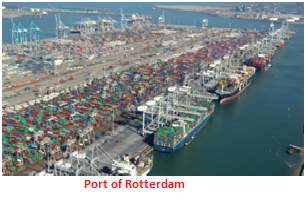 Empty container boxes crucial for Asia’s exporters are getting stuck in the port of Rotterdam as a growing backlog of undelivered goods at Europe’s export hub forces ocean carriers to prioritize shipments of filled boxes.

The Dutch port has faced an onslaught of both goods and empty boxes offloaded from other European maritime operations, shipping experts said. This has coincided with carriers reducing the number of vessel trips from the continent to China after Shanghai authorities locked down the city in March, they said.

“Terminals are allowing shipping carriers only a limited capacity for empty boxes and are focusing on transporting loaded containers,” Kuehne + Nagel International AG, one of Europe’s largest freight forwarders, said in an e-mailed reply to  questions. “Containers are piling up at the terminals, and more and more containers cannot be returned on departures, including those to Asia.”

Although authorities in Shanghai lifted restrictions this month, shortages of vessels and delays at European ports are forcing export goods to compete with empty boxes for space on ships headed to China, threatening to send a further wave of disruption to Asia, logistics firms said.

Factories in China will require empty boxes to make up for lost orders during the past few months, and will be hampered by the shortage of ships and equipment, they said. The volume of trucked container goods into Shanghai from nearby provinces in China has recovered to 71% of levels seen on March 12, according to data from FourKites. Meanwhile, trucking shortages and worker protests in the US and Europe are holding up deliveries.

High congestion levels at Rotterdam prompted shipping line AP Moller-Maersk A/S to inform customers last week it would be relocating unclaimed boxes of goods out of the port.

The situation has meant longer waiting times for vessels at all major North European ports, Kuehne + Nagel said. About 60% of the vessels traveling from Europe to Asia in April and May of this year were delayed, and there were 13 ships waiting for a berth in Rotterdam as of June 17.