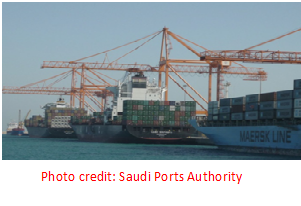 DP World and the Saudi Ports Authority (Mawani) announced  19 June the signing of a 30-year agreement with an investment value of more than SAR 500 million ($133.33 million) to build a state-of-the-art, port-centric Logistics Park at the Jeddah Islamic Port.

The agreement was signed under the Patronage of the Saudi Minister of Transport and Logistic Services and Chairman of the Board of Saudi Ports Authority, His Excellency Eng. Saleh bin Nasser Al-Jasser.

The facility will bolster DP World’s footprint in the region

The 415,000 square metre purpose-built facility will bolster DP World’s footprint in the region and will bring pioneering multi-modal logistics solutions to the Kingdom of Saudi Arabia.

The port-centric Logistics Park will provide an integrated platform of services that link port-operations with last-mile activities, providing temperature-controlled storage for cargo, in addition to its processing, labelling, fulfilment, consolidation and de-consolidation.

Sultan Ahmed Bin Sulayem, Group Chairman and CEO of DP World, commented: “. We are confident that today’s milestone will contribute to increasing efficiency and productivity levels and creating new jobs.”