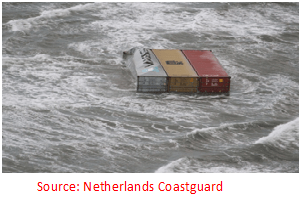 During the last two years, the container losses have significantly increased with the average losses for the two year period 2020-2021 reaching 3,113 compared to 779 in the previous period.

One of the most important reasons for this worrying spike is the unusually high number of weather-related incidents, according to the World Shipping Council (WSC), which has published a report showing that although the containers lost overboard represent less than 0.001% of the global container fleet, the past two years have seen a worrying break in the downward trend for losses, with the average number of containers lost at sea per year since the start of the survey increasing by 18% to 1,629.

In view of the container losses increase, WSC and member lines have initiated the MARIN Top Tier project, which will run over three years and will use scientific analyses, studies, and desktop as well as real-life measurements and data collection to develop and publish specific, actionable recommendations to reduce the risk of containers lost overboard.

The revision of the IMO’s guidelines for the inspection programmes for cargo transport units.

.In addition to the MARIN TopTier project, WSC and member companies have contributed to and supported the revision of the IMO’s guidelines for the inspection programmes for cargo transport units. WSC also supports the creation of a mandatory reporting framework for all containers lost at sea – an issue that will be on IMO’s agenda in September (CCC 8).

The high number of incidents has led WSC to the decision to increase the frequency of its  Containers Lost at Sea report. The council announced that, effective from the next year, the report will be updated each year, instead of every three years.