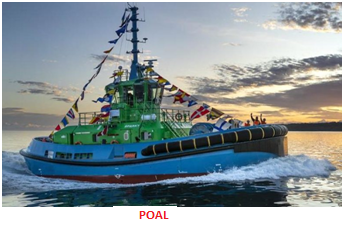 Ports of Auckland has welcomed a new addition to its fleet, with the arrival of the world’s first full size, ship-handling electric tug. Named Sparky, as voted by New Zealanders in a public vote in 2020, the e-tug ought to result in the saving of approximately 465 tonnes of CO2 in diesel emissions annually and marks another important step on the port’s plans to be totally emissions free by 2040.

The expected cost of operating Sparky is less than a third of the cost of running a diesel tug.

Battery operated, the e-tug has a recharge time of approximately two hours and can run up to four shipping moves on one charge.

Being electric she’s a lot quieter, and cleaner, than our current diesel tugs

“You’ll be able to spot Sparky on the water as her superstructure is painted bright green, unlike our diesel tugs” said Allan D’Souza, a general manager at the port. “What you won’t notice is noise or smoke; being electric she’s a lot quieter, and cleaner, than our current diesel tugs.”

Sparky is the first Damen RSD-E Tug 2513. It has a 6 m draft, is 24.73 long and has two azimuth thrusters with 3 m diameter propellers. Sparky has a 70-tonne bollard pull and features 80 battery racks holding 2,240 batteries, totalling 2,784 kWh of power. It also has two 1000kW back-up generator sets which will only be used in cases of emergency or some fault.

In related news, a fully-electric ferry, Ellen, has set a new world record in Denmark for the longest voyage – 92 km – on a single battery charge.