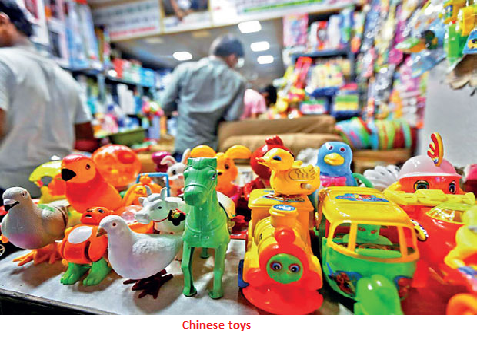 Entry of Chinese toys into the country cut to size

Interventions by the government for the Toy Sector include, Directorate General of Foreign Trade (DGFT) has mandated sample testing of each consignment and no permission for sale unless the quality testing is successful. In case of failure, the consignment is either sent back or destroyed at the cost of the importer.

The Government issued Toys (Quality Control) Order, 2020 through which toys have been brought under compulsory Bureau of Indian Standards (BIS) certification with effect from January 1, 2021..The Quality control order on Toys was amended to exempt goods and articles manufactured and sold by artisans registered with Development Commissioner (M/o Textile) and also by registered proprietor and authorized users of a product registered as Geographical Indication by the Office of Controller General of Patents, Designs and Trademarks (CGPDTM).

Bureau of Indian Standards (BIS) made special provisions on so as to grant license to micro scale units manufacturing toys without testing facility for one year and not to insist on establishing in-house facility.