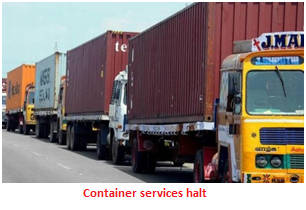 Container movement has come to a standstill over the last three days due to the strike called by trailer operators, plying nearly 4,000 vehicles at the ports of Chennai, Kamarajar at Ennore and Adani at Katupalli. This has left around 8,000 import boxes stranded at the ports, said multiple sources.

The export containers are stranded at many places and missing vessels have a big impact. Cargo such as pharma, medicine and automobile spares are stuck in ports and container freight stations (CFS), said a port user.

The trailer operators are seeking a revision in transport rates for intra-city movement. “We have asked for an 80 per cent increase in the rates,” said SR Raja of the Trailer Owners’ Association. The National Association of Container Freight Station (NACFS) is not agreeing to this, he added.

Raja said a revision was sought using the base rate of 2014. While the price of all transport related items and diesel has gone up, the freight rate for transport of cargo / containers has remained stagnant for eight years.

Reluctance among the stakeholders to meet and discuss their concerns

Their efforts to reach out to the stakeholders – CFS, shipping lines, Customs brokers, importers, exporters and others – have failed amidst a reluctance among the stakeholders to meet and discuss their concerns. Left with no option and the spiralling cost of transport operations, supply of vehicles for cargo movement from and to the ports has been stopped.

A large cross-section feels that the transport rate deserves review and revision, though the quantum sought by the transport operators is not viable and a reasonable increase could be considered.

A meeting among stakeholders, including the trailer operators, NACFS, Chennai Custom Brokers’ Association (CCBA) with the traffic police, RTO, port officials and District Administration did not make any headway as both container freight station operators and steamer agents declined any increase, while the CCBA agreed to consider a 10 per cent hike.

Sources said a meeting among all the stakeholders will be held on Thursday to sort out the issue.