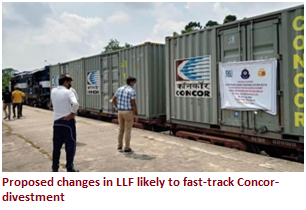 The Union Cabinet may consider a proposal to cut land licensing fees (LLF) and increase the lease period for railway land on July 6, sources say.

The Cabinet’s approval for the much-awaited amendment to the Railway Land Policy would ease the strategic divestment process of Container Corporation of India (Concor).

According to the sources, the proposal was sent to the Cabinet for approval three weeks back and would be discussed in the next meeting. Another source has confirmed that the Cabinet meeting is scheduled to take place via video conferencing on July 6, although he didn’t disclose the agenda.

The government is planning to reduce the LLF for industrial users of railway land to about two to three percent of the value of land as against six percent now. Extension of the period for railway land lease is also a part of the proposal. One of the options is to increase the land lease period from five years to 35 years or more, the sources added.

The proposed changes will pave way for the privatisation of Concor, because it will help strategic buyers pay much lesser amounts as land rentals to Indian Railways for a longer period. This was one of the key suggestions put forward by the investment advisors of Concor.

The Union Cabinet in November 2019 approved the disinvestment of the government’s 30.8 percent shareholding in the company, along with the transfer of management control.