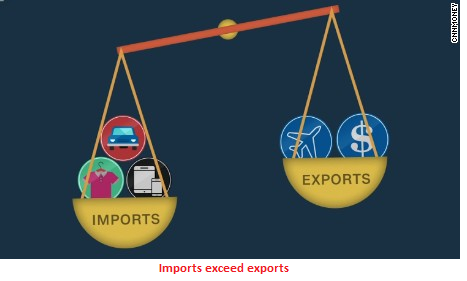 Trade and current account deficit of the country goes up

India’s trade deficit shot up three times in June compared to the corresponding period last year. The deficit, difference between country’s imports and exports rose to a record high of 25.6 billion US dollars as against 9.61 billion US dollars in June 2021 an analysis of the commerce department data released on July fourth.

The spike was primarily driven by the import cost of petroleum, coal and gold and slower exports.

India's merchandise exports in June rose 16.8 per cent year-on-year to 37.9 billion US dollars, which is lower than the 20.5 per cent registered in May according to the data. Imports, however, jumped 51 per cent to 63.58 billion US dollars.

The Current Account Deficit is expected to grow to three per cent of GDP this fiscal, with imports becoming costlier owing to higher commodity prices, while exports face slowing external demand.