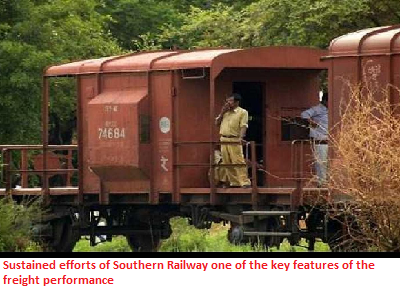 Southern Railway has achieved an originating Freight Earnings of Rs.922 crores during the first quarter of the current financial year from April to June 2022 and surpasses the target set by the railway board.

The Railway has achieved 9.98 Million Tons of Originating Freight loading during the first quarter of the current financial year dispelling the notion that the Zone is passenger oriented and therefore did not generate revenue for the railways.

Business Development Units of the Zone has brought 35,000 tons of additional traffic recording Rs.33.75 Crores revenue in April-June 2022.  Southern Railway registers 3.114 Million tons of freight loading in June 2022, an increase of 53 per cent over June 2021 loading

Sustained efforts of Southern Railway to increase supply of Coal to Power houses, in close co-ordination with Ministry of Power and Coal during this period have been one of the key features of the freight performance. The loading of Coal to Power Houses (both domestic and imported) has increased by more than 0.46 Million tons in April-June’22 with a growth of 18 per cent as against corresponding quarter in the last FY. With these sustained efforts, the trend of reducing coal stocks at Power houses has been reversed and the coal stocks at the Power houses have again started improving on a regular basis.

Due to the concerted efforts of Business development team, 0.35 MT of new streams of traffic like Carbon Black Feed Stock in Oil tank wagons, Rock Phosphate in Covered Wagons, Cement in Container wagons, Sugar, Limestone, Laterite, Gypsum to Cement Plants, Motor Tractors in NMG wagons, Construction Materials like Boulders, Stones (Quartz) were transported to various regions of India and brought about an earnings of Rs.33.75 Crores during April-June’22.