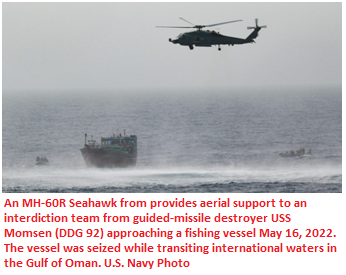 The U.S. Navy will for the first time reward individuals for reporting information that leads to the detection of illegal maritime activity or seizure of illicit cargo in waters across the Middle East.

The first-of-its-kind program,  by the U.S. Naval Forces Central Command (NAVCENT), could potentially reward a maximum $100,000 cash payout or non-monetary items, like boats, vehicles, food or equipment, for tips that support counterterrorism operations or leads U.S. naval forces to successfully seize illicit cargo, such as illegal weapons or narcotics.

U.S. citizens are not eligible for rewards under the program.

“Launching this program represents another example of our commitment to this region and its security,” said Vice Adm. Brad Cooper, commander of NAVCENT, U.S. 5th Fleet and Combined Maritime Forces. “This also enhances our vigilance and supports counterterrorism efforts, which are essential to safeguarding the free flow of commerce.”

Last year, illicit cargo seizures in the Middle East skyrocketed after U.S. and multinational forces increased patrols in the Gulf of Oman and Arabian Sea.

The U.S. 5th Fleet area of operations encompasses about 2.5 million square miles of water area and includes the Arabian Gulf, Gulf of Oman, Red Sea and parts of the Indian Ocean. The region is comprised of 21 countries and includes three critical choke points at the Strait of Hormuz, the Suez Canal and the Strait of Bab al-Mandeb at the southern tip of Yemen.

In order to receive the reward, tips need to meet specific criteria under the Department of Defense Rewards Program. Tips can be reported by calling +973 3914-5845 or online by going to https://dodrewardsprogram.net.