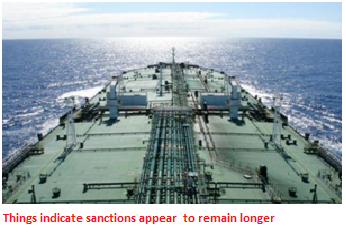 US adds more shipping companies to its Iranian sanctions list

Tanker watchers looking to read the diplomatic channels between Washington and Tehran will take July 6’s decision to target more Iranian-linked maritime firms as a sign that sanctions are still some way away from being lifted.

US nuclear talks with Iran have been stuttering in recent weeks.

Backing up this sense of impasse, the US Treasury added another dozen entities related to Iranian petrochemicals and shipping to its sanctions list yesterday.

The US Treasury Department said in a statement that the network of people and entities had used a web of Gulf-based front companies to facilitate the delivery and sale of hundreds of millions of dollars in products from Iranian firms to China and elsewhere in East Asia.

“While the United States is committed to achieving an agreement with Iran that seeks a mutual return to compliance with the (2015 nuclear deal), we will continue to use all our authorities to enforce sanctions on the sale of Iranian petroleum and petrochemicals,” Brian Nelson, the treasury’s undersecretary for terrorism and financial intelligence, said.

Additions to the blacklist

Among those added to the US blacklist were Truong Phat Loc Shipping from Vietnam and Singapore-based Everwin Shipmanagement.

Tanker analysts have been keeping a close eye on the sanctions discussions, aware of the impact of the return of the NITC fleet would have on overall tanker fortunes.