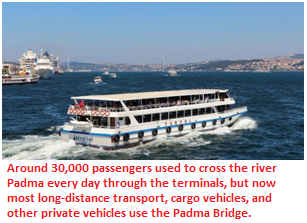 The recent hike in fuel prices has deserted the Daulatdia ferry terminal, which was once packed with passengers.

The terminal’s ferries and launches now sit idle as owners are unable to manage enough passengers to operate their vessels.

They told Dhaka Tribune that previously they had to run the launches every 20 minutes, but since the fuel prices have increased, it takes over an hour to get enough people on board.

However, they also mentioned that the Daulatdia ferry terminal has been facing this issue since the Padma Bridge was inaugurated on June 25, resulting in losses for the owners.

According to Bangladesh Inland Water Transport Authority (BIWTA), as many as 25 launches operate on the Daulatdia-Paturia and Aricha-Nagarbari waterways.

Out of that, 17 launches run on Daulatdia-Paturia route.

BIWTA Aricha office Traffic Inspector Aftab Hossain said: “Even though passenger numbers have decreased, no launch has been removed from the terminals.”