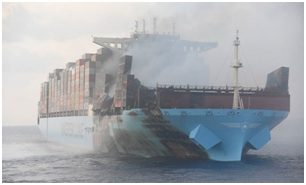 The deadly blaze on the Maersk Honam in 2018

Chastened by statistics from insurers that suggest a major fire takes place on a boxship every 60 days, Danish carrier Maersk has been taking plenty of action on this issue in recent years.

Maersk, which has suffered a number of fires across its fleet in recent years, including the deadly blaze on the Maersk Honam in 2018 (pictured), has decided to install VIKING’s HydroPen firefighting system across its entire fleet.

The HydroPen system  is designed for direct firefighting in stacked shipping containers. It is driven purely by water pressure through an attached deck fire hose. When water pressure is activated, a turbine drives the HydroPen drilling unit until it penetrates the container door, whereupon the system sprays water into the container to extinguish the fire directly at the source.

In the case of a fire at height in the container stack, the HydroPen system can be deployed using a telescopic device. Beyond water, the system is compatible with foam or CO2.

ICHCA International, the cargo handling operatives association, calculated back in 2019 that of the 60m packed containers moved each year, 10% or 6m are declared as dangerous goods. Information from published government inspections – which are invariably biased towards declared dangerous goods loads – suggests that 20% of these are poorly packed or incorrectly identified. This translates into 1.3m potentially unstable dangerous goods containers travelling around the world each year.