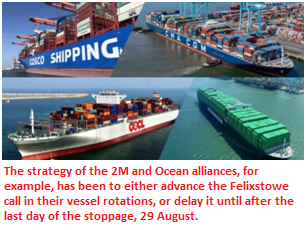 Ocean carriers calling at Felixstowe are making contingency plans in case the eight-day strike at the UK’s biggest container port starting on Sunday is not a one-off.

So far, the strategy of the 2M and Ocean alliances, for example, has been to either advance the Felixstowe call in their vessel rotations, or delay it until after the last day of the stoppage, 29 August.

However, with no more meetings planned between the port management and Unite union negotiators, carriers are increasingly concerned that the pay dispute could be long-running, with a series of further 24- or 48-hour strikes.

This follows the news that Liverpool dockers had voted for strike action after rejecting the Peel Group-owned port’s 7% wage offer.

Understandably, the two major shipping line groupings are keeping their cards close to their chest on their contingency strategies, but The Loadstar understands that the Ocean Alliance may offload UK cargo at Piraeus, while 2M partners Maersk and MSC are investigating the options for over-carrying UK imports to Wilhelmshaven and Antwerp.

A report from data and analytics company Russell Group suggests that the strike at Felixstowe could result in $800m of trade being disrupted. Its data predicts that, based on previous August trade flows at Felixstowe, UK apparel imports worth $82m and $32m of electronic components could be impacted by the strike.