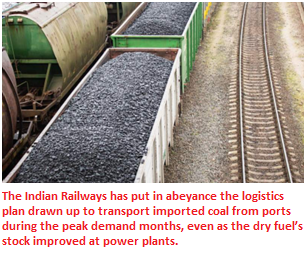 The decision came after the power ministry asked coal-fired electricity generation companies to halve the blending percentage of imported coal in their total mix to 5%.

“The decision to put the logistics plan in abeyance is being taken on account of improved coal stock at power plants,” an official said, adding that further deployment would be on a demand basis. This could also result in fewer rakes being dedicated for moving imported coal from ports to power plants, allowing for railway infrastructure to be freed up and used for serving demand from other sectors.

This logistics plan was drawn up in April after a surge in power demand prompted the power ministry to direct gencos to import 10% of coal requirement for the blending purpose.

In another advisory on August 1, the power ministry asked NTPC and Damodar Valley Corporation to bring down the blending percentage to 5% at their generation units and keep monitoring the situation closely.