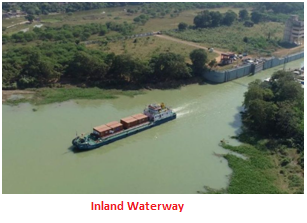 Efforts being made to develop waterways with private sector’s help: IWAI

Inland Waterways Authority of India (IWAI) Chairman Sanjay Bandopadhyaya on Wednesday 17 August said that efforts are being made to develop waterways with the help of the private sector.

Speaking at the ‘Maritime Public Private Partnership Conclave 2022, Bandopadhyaya said, “We have given assured depth contract at three stretches and more contracts are on bids.”

Waterways around Kolkata are also being developed, he said, adding that the city is connected to even farflung north-eastern region and other parts of the country through waterways and rivers.

The infrastructure developed on NWs like channels with navigational facilities and terminals/jetties may also be used by ferry/tourist vessels.

Also, financial assistance for the construction of passenger jetties and infrastructure facilities on waterways in Karnataka has been approved under Sagarmala scheme.

Cargo movement of 108.79 million metric tonnes (MMT) by inland water transport through NWs has been recorded during 2021-22.