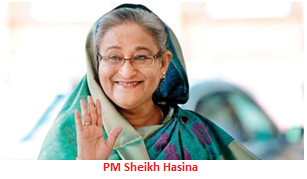 Prime Minister Sheikh Hasina has given her seal of approval to a proposal to begin formal negotiations towards signing the Comprehensive Economic Partnership Agreement (CEPA) with India.

She also agreed on including this deal signing issue in the joint statement to be issued by the Bangladeshi and Indian PMs during her upcoming visit to India slated for 5-7 September.

Bangladesh is thus for the first time going to officially start negotiations on signing a free trade agreement (FTA) with any country. Some other countries, including China and Japan, have offered Bangladesh FTA proposals, but everything is now at an assessment stage.

“Signing such an agreement with major trade partners brings about good results. But a risk of a fall in revenue is also associated with it. In FY22, Bangladesh generated Tk17,964 crore against imports amounting to Tk1,44,160 crore,” the commerce ministry said in the summary.

During the visit of Indian Prime Minister Narendra Modi to Bangladesh on 27 March 2021, the prime ministers of the two countries issued instructions on quickly completing the joint feasibility study relating to the signing of the CEPA to strengthen bilateral trade relations.

Accordingly, Bangladesh’s Foreign Trade Institute and India’s Centre for Regional Trade conducted a detailed joint feasibility study. Later in May this year, they sent the study report to their respective commerce ministries. The report came up with a positive opinion over beginning negotiations for the signing of CEPA.