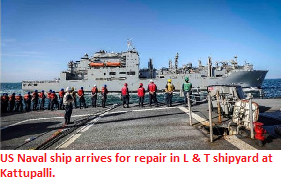 The task of repairing US naval ship, Charles Drew, docked at Larsen and Toubro's shipyard at Katupalli near chennai was completed on August 17th.

The routine maintenance conducted aboard the naval ship included repairs to safety and crew habitability systems and equipment, a press release from the office of the US Consulate General, Chennai said.

The first American naval ship to arrive in India for repair, it docked at L&T's Kattupalli shipyard in north Chennai on August 7. Authorities had specified then that the task of repair/maintenance would be completed by August 17.

The US navy shortlisted the Chennai based L and T ship yard after an elaborate survey of the shipyards in the region for undertaking repairs of their ships operating for the seventh fleet in the Indo Pacific.

Judith Ravin, US Consul General in Chennai said the repair of a United States naval ship, the Charles Drew, carried out by L&T is a landmark development to be celebrated as a symbol of strengthened US-India partnership

The naval ship's visit demonstrates the commitment of the US Navy and Department of Defense to utilise repair facilities in India, the press note said. Charles Drew is one of the many ships that are part of the US Navy's MSC's Combat Logistics Force (CLF). CLF are the supply lines to US navy ships while at sea.

These ships provide virtually everything Navy ships need including fuel, food, fleet ordnance, dry cargo, spare parts, mail, and other supplies.   The US fleet  remains at sea  combat ready for extended periods of time. In addition to US Navy ships, CLF ships also resupply international partners and allies operating in the Indo-Pacific region.