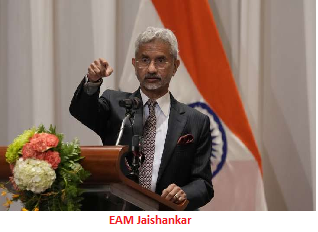 "What happens in our neighbourhood, any developments which have a bearing on our security obviously are of an interest to us," Jaishankar said while speaking at the 9th India-Thailand Joint Commission Meeting in Bangkok. He addressed the press conference along with his Thai counterpart Don Pramudwinai after the joint commission meeting.

"I think a spokesman had said some time ago, we obviously monitor any development, which has a bearing on our interests very, very carefully. So, I think I will leave at that," he said when asked about the docking of the ballistic missile and satellite tracking ship 'Yuan Wang 5' at the Hambantota port in Sri Lanka on Tuesday. It will remain there till August 22 for replenishment, Sri Lankan officials have said.

The ship was originally scheduled to arrive at the Chinese-run port on August 11 but it was delayed in absence of permission by the Sri Lankan authorities. Colombo had reportedly asked Beijing to defer the visit amid Delhi's concerns over the issue. This followed a meeting between external affairs ministers of both India and Lanka when they met in Indonesia when the former took strong exception to the visit of the Chinese spy ship to the Sri Lankan Port.

On Saturday, Sri Lankan authorities granted the port access to the vessel from August 16 to 22 on condition that it will keep the Automatic Identification System (AIS) switched on within the Exclusive Economic Zone (EEZ) of Sri Lanka and no scientific research to be conducted in Sri Lankan waters.

China said the ship is used for scientific research, but the US Defense Department said the ship is under the command of China's People's Liberation Army (PLA) and is capable of tracking satellites and missile launches.

China's Ministry of Foreign Affairs said on Tuesday  17 August the ship is conducting scientific research "in accordance with international law."