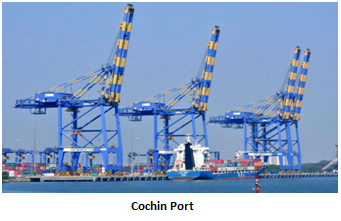 Vallarpadam has hardly any scope for developing as a transhipment terminal for many reasons, a resolution passed at the 10th annual conference of the Federation noted.

The Water Transport Workers Federation of India has urged the Shipping Ministry to step back from the proposed deepening of the channel for ICTT Vallarpadam in Cochin Port.

It is a proven fact that Vallarpadam has hardly any scope for developing as a transhipment terminal for many reasons, including its poor cargo hinterland, a resolution passed at the 10 th annual conference of the Federation in Kolkata noted.

CD Nandakumar, the newly elected president of the Federation, said that the DP World-operated ICTT project is still functioning as an ordinary terminal, witnessing a slow growth in coastal cargo ever since its establishment in 2011. The present proposal to further deepen the channel will incur the port a huge expenditure for maintenance dredging, as the present annual dredging cost was to the tune of ₹140 crore.

Hence, any proposal to add further financial burden is not affordable to the port, thereby making its future uncertain. The absence of a minimum guarantee throughput (MGT) provision in the ICTT License agreement has made things worse, he added.

The resolution also pointed out that the speedy implementation of several aggressive policies in major ports would end up the ownership of the government in the port sector, which is considered the lifeline and backbone of the country’s economy. It is to be noted that 95 per cent of the country’s exim trade was handled by major ports till 1991, and now it has been passed on to the private sector by repealing the Major Port Trust Act 1963.

The resolution also cautioned the government against the emergence of monopoly in port sector as its impact would be worse in the long run.

The meeting also appealed to the government to take urgent steps for the release of Indian seafarers in MV Heroic Idun from the custody of the Nigerian Navy. It also urged expedite action on bipartite wage negotiations and settle the bonus issue of port and dock workers.