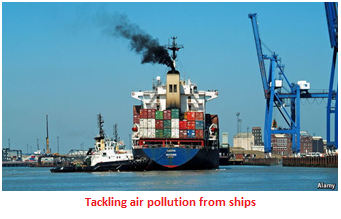 On 15 December 2022 the 79th session of the International Maritime Organization’s (IMO) Marine Environment Protection Committee (MEPC 79) adopted the Mediterranean Sea Emission Control Area for Sulphur Oxides and Particulate Matter (Med SOx ECA), with effect from 1 May 2025, to further limit air pollution from ships, pursuant to Annex VI to the International Convention for the Prevention of Pollution from Ships (MARPOL).

The Mediterranean Sea has thus become the fifth area worldwide to be designated as an Emission Control Area for Sulphur Oxides and Particulate Matter.

Here are three facts illustrating the importance of Med SOx ECA in the Mediterranean and beyond:

Tailwind to greener shipping in the Mediterranean

The Mediterranean Sea is home to some of the busiest maritime routes in the world, supporting 20 per cent of seaborne trade.

Once it comes into effect on 1 May 2025, ships operating in Med SOx ECA will be required to comply with a limit for sulphur content in fuel oil that is a fifth of the legal limit outside this area (0.10 per cent mass by mass (m/m), compared with 0.50 per cent m/m allowed outside Med SOx ECA).

With this achievement secured, the UNEP/MAP-Barcelona Convention system will direct its attention to Nitrogen Oxides (NOx), another type of air pollutants emitted by ships, and will continue to support IMO’s work on the decarbonization of international shipping.

Considerable benefits for people and nature

Med SOx ECA will translate into a 78.7 per cent drop in SOx emissions and an annual reduction of 8.5 million tonnes of SOx released into the atmosphere. In addition, emissions of Particulate Matter (PM 2.5) will be slashed by 23.7 per cent.

Environmental multilateralism at its best

UNEP/MAP acted as a forum for the intergovernmental negotiations on the Med SOx ECA and catalysed progress at the regional level, including through the scientific and technical support provided by the Regional Marine Pollution Emergency Response Centre for the Mediterranean Sea (REMPEC) and the Plan Bleu Regional Activity Centre.

The next step will be for UNEP/MAP to join forces with IMO and REMPEC to secure the ratification of MARPOL Annex VI by the six Mediterranean countries that have not yet done so. Securing this ratification by 1 May 2024 is required to ensure the uniform and effective application of Med SOx ECA when it comes into force on 1 May 2025