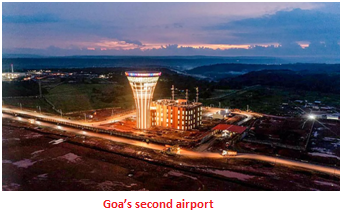 The first passenger flight arrived at the Manohar International Airport in Goa from Hyderabad on January fifth marking the commencement of operations at the new facility in the coastal state.

The IndiGo flight from Hyderabad landed at 9 hours at the new airport located at Mopa in North Goa district, airport officials said. Union Minister Shripad Naik and Goa Tourism Minister Rohan Khaunte were present to welcome the passengers at the terminal building of the airport.

With Mopa, Goa has got another international airport which is located 50 km apart from the south Goa-based Dabolim facility, operated as a civil enclave in the Indian Navy's air station INS Hansa.

The first phase of the Rs 2,870 crore Mopa airport project will cater to around 44 lakh passengers per annum, which can be expanded to a saturation capacity of 33 MPPA, an official earlier said.

The airport has been built on the theme of sustainable infrastructure and has a solar power plant, green buildings, LED lights on the runway, rainwater harvesting, state-of-the-art sewage treatment plant with recycling facilities, among other such facilities.