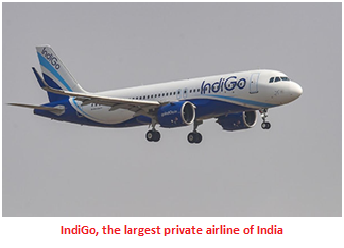 IndiGo, the largest private airline of India, has decided to increase its flight frequency on Hyderabad-Dhaka-Hyderabad route from existing two weekly flight to three considering increased number of passengers on the route.

The airlines will operate flights on every Saturday, Tuesday and Thursday effective from Thursday, 12 Jan. Chief Executive Officer of Renaissance Aviation Services, the local general sales agent of indigo has said.

The airlines started operating its flight on Dhaka-Hyderabad route from 18 April this year with two weekly flights on every Monday and Saturday.

IndiGo, a low cost carrier operating over 1,500 daily flights and connecting 73 Indian domestic destinations and 24 international destinations with its fleet of 275 plus aircraft.

Travellers from Dhaka could also use Hyderabad as the hub to connect more than 70 cities within India and beyond.

IndiGo is also operating four flights per week on Chennei-Dhaka-Chennai, seven on Delhi-Dhaka-Delhi, four on MumbaI-Dhaka -Mumbai and twelve on Kolkata-Dhaka-Kolkata routes.