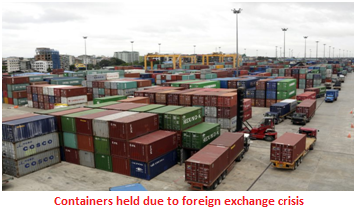 Thousands of containers packed with essential food items, raw materials and medical equipment have been held up at Karachi port as the country grapples with a desperate foreign exchange crisis.

A shortage of crucial dollars has left banks refusing to issue new letters of credit for importers, hitting an economy already squeezed by soaring inflation and lacklustre growth.

“I have been in the business for the past 40 years and I have not witnessed a worse time,” said Abdul Majeed, an official with the All Pakistan Customs Agents Association.

He was speaking from an office near Karachi port, where shipping containers are stuck waiting for payment guarantees — packed with lentils, pharmaceuticals, diagnostic equipment and chemicals for manufacturing industries.

State bank forex reserves this week dwindled to less than $6 billion — the lowest in nearly nine years — with obligations of more than $8 billion due in the first quarter alone.

The reserves are enough to pay for around a month of imports, according to analysts.

The economy has crumbled alongside a simmering political crisis.

The nation’s enormous national debt –- currently $274 billion, or nearly 90 per cent of gross domestic product — and the endless effort to service it makes Pakistan particularly vulnerable to economic shocks.

Abdul Rauf, an importer of grain and pulses, said he has just 25 days of stock left and without the release of dollars, there will be an “immense shortage” during the holy month of Ramazan, which begins in March.

“I’ve never witnessed a situation where people are so worried,” he told.