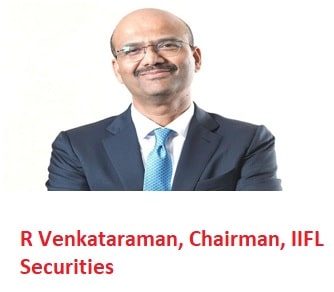 Govt may attempt populist measures but will be fiscally conservative: IIFL Securities Chairman

With the economy now in full swing after about two-and-a-half years of lockdowns and restrictions, all eyes are on the forthcoming General Budget for direction and the way forward in terms of fiscal policy.

Though prices have cooled down somewhat, there is still anxiety as to how the government plans to tackle inflationary trends, its measures to spur capital expenditure and bring back growth and jobs. There is the added dimension of next year being an election year and temptation to lean towards populism.

R Venkataraman, Chairman, IIFL Securities said that he expects the government to be fiscally conservative.

Venkataraman said in an interview with businessline:

What are your broad expectations from the Budget?

We think that the government will continue to be fiscally conservative. It will attempt some populist measures, but food subsidy being cut gives it the room to do this up to ₹1 trillion. There is a risk of customs duties being raised on selective items as this government has been inclined to be protectionist in its pursuit of domestic manufacturing. We expect continued thrust on capex, focused on infrastructure build-out as construction pulls labour in from rural areas and this can prevent a recurrence of rural distress in the lead-up to the elections.

What are the factors that will have a major impact on markets this year?

China reopening could be inflationary (more demand for commodities) as well as disinflationary (supply chains healing), so it is difficult to say which one will prevail.

The US over-tightening in order to snuff out inflation decisively is a possibility, since it is difficult to engineer a soft landing and inflation scare has begun to dominate the US Fed speak

Finally, Russia-Ukraine crisis, if it resolves will create a happier supply situation, but the likelihood is low. The dollar may continue to depreciate and China reopening could give emerging markets a fillip.