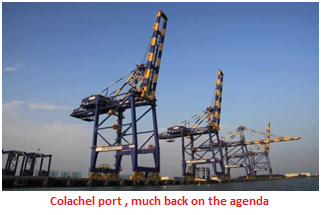 Sanjeev Ranjan, Secretary, Shipping said that ports at Kochi and Vizhinjam in Kerala as well as Galathea Bay in Andaman Nicobar Islands have made a head way in the direction of becoming transshipment hubs. “Some of the biggest of ships pass through Galathea Bay, and we need to have a hub which serves ports all along the Bay of Bengal, not only for India but neighboring countries of Bangaldesh, Indonesia and Thailand,”

Union Ministry of Ports, Shipping and Waterways has directed all the major ports to prepare a masterplan to become mega ports by 2047.

Transhipment hubs are ports that have connections to originating and destination ports. Currently, nearly 75% of India’s Transshipment cargo is handled at  Colombo Singapore and Port Klang.

While the Colachel transshipment terminal project was given in principle approval by the Union cabinet way back on 2015, Prime Minister Narendra Modi had given assurance that VOC Port Tuticorin will be developed as transshipment hub.