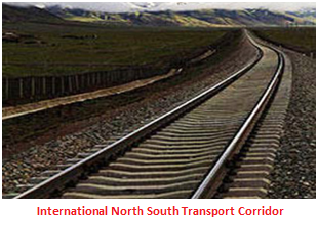 A full container train with paper products, including newsprint, is on its way from Russia to Chennai through a multi-modal transportation according to media reports

In the first leg, the cargo took the rail mode from Russia to Bandar Abbas port in Iran through Kazakhstan and Turkmenistan. From the Iranian port, the cargo will move by sea to Chennai in the second leg.

The train carried 53 forty-foot containers with newsprint in 32 eighty-foot flatcars, owned by the container operator RZD Business Active, according to Russian media. This was confirmed by multiple sources in Chennai.

The INSTC route, through ports in Iran and Azerbaijan, cuts the time to move goods by almost half as it will avoid the present circuitous sea route through the Suez Canal.

The multi-modal transport route will involve train movement through Kazakhstan and Turkmenistan to reach Iran’s Bandar Abbas port from where it will be take the sea route to reach Chennai.

The INSTC is a key trade corridor project, wherein India is partnering with 12 countries to establish an economic corridor.