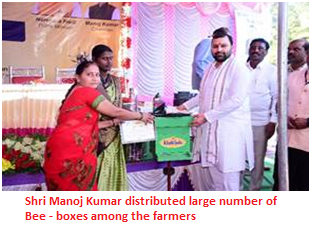 Chairman KVIC also released margin money subsidy of Rs 165 Crores to 5046 beneficiaries from the states of East & South zone with the total bank loan of Rs 488 crores for setting up of new micro enterprises under PMEGP scheme which is expected to create more than 40000 employment opportunities in these states.

CVPI, Khanapur is one of the best pottery training institutes not only in South India but also in the whole country. During this, he discussed with the beneficiaries of PMEGP and SFURTI cluster. In the evening, a Khadi sanvad was conducted with Khadi Institutions of Dharwad regions & Chairman assured that KVIC will continue supporting the good work being done by these institutions.

Earlier, Shri Manoj Kumar distributed large number of Bee - boxes among the farmers of the district during a brief function held at Nisarani village in Shimoga district of Karnataka this morning. Speaking on the occasion Chairman, KVIC, Shri Manoj Kumar said that doubling the income of farmers is the dream of Prime Minister Narendra Modi and therefore KVIC is continuously working in this direction under 'Honey Mission'.

The Chairman, KVIC said “We want our country to become self-reliant in honey production. At present, we are the fourth-largest producer of honey in the world but in the coming time, we want to become the number one producer of honey and for that, we are making all these attempts.”