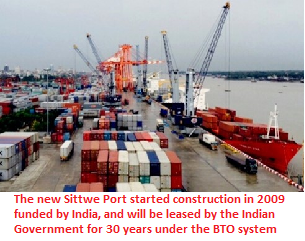 The port is a part of the Kaladan Multi-Modal Transit Transport Project, which will be important in the trade sector between Myanmar and India. Now that all the construction work has been completed, the opening ceremony of the port will be held soon.

However the exact date of the opening ceremony has not yet been determined Rakhine State Government spokesperson and advocate-general U Hla Thein told Narinjara.

When Sittwe Port is opened, there will be direct trade between India and Rakhine State, so it will be beneficial not only for Rakhine State but also for the economy of Myanmar, REIC Rakhine Economic Initiative Public Co., Ltd Vice President U Khin Maung Gyi, a renowned Rakhine businessman, commented.

The port is a part of the Kaladan Multi-Modal Transit Transport Project, which will facilitate the trade sector between Myanmar and India.