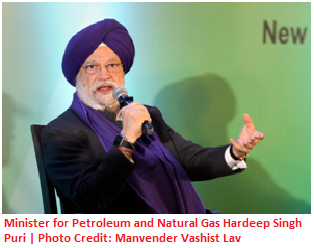 Oil Minister Hardeep Singh Puri on Sunday 22 Jan asked oil marketing companies (OMCs) to cut retail prices of petrol and diesel, but only after fulfilment of two conditions — once international prices have stabilised and the companies have managed to reduce under-recoveries.

Speaking on the sidelines of flagging off a CNG-driven boat race on the River Ganga here, Puri claimed that fuel cost has been under check, despite volatile prices of the Indian crude basket.

The event was organised by GAIL as a run up to the India Energy Week, which will take place next month in Bengaluru.

OMCs have incurred a loss of ₹21,200 crore on account of selling petrol and diesel below the cost price. Though the companies are free to revise the product prices based on economics, but in practical terms, political consideration is also important.

Puri said one of the reasons for keeping fuel prices under check is the reduction in taxes. The Centre had revised taxes twice between November 2021 and May 2022. Prices of petrol and diesel have not been revised since May 22, 2022, when the Finance Ministry cut Excise duty followed by reduction in sales tax by States.

However, during this period, while the Brent crude came down to $88/barrel from the highs of $139 in March, India has been increasing its import from Russia. Both of these have a combined impact on the overall fuel import bill, but losses are still there which seems to be the reason why OMCs are not able to cut the prices.

“We are earning gross profit on petrol and it is in single digit. However, during the last 15 days, due to cracks, petrol profitability has been effected. Diesel sale is still on gross loss and it is in double digits,” said a senior official from an OMC. Gross amount of loss or profit for Q3 will be known, once OMCs declare their financial results.

In a recent report, Moody’s Investor Services said as international prices of gasoline (petrol) and gasoil (diesel) cool on slowdown concerns, marketing losses will ease for the three OMCs. “Still, overall earnings for FY23 will be weak because of marketing losses in the first half. The rupee’s depreciation against the US dollar further hit profits,” it added.

Significant marketing losses earlier in the year will drag on earnings for the OMCs in FY23. Net realised prices for gasoline and gasoil, which account for almost 55-60 per cent of product sales for the three companies, did not increase at the same pace as international prices, resulting in EBITDA losses for the six months through September 2022, Moody’s said.