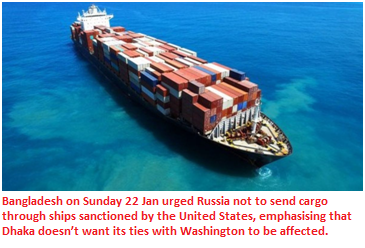 “We told Russia that they can send us cargo through any of their vessels except 69 ships that are under (US) sanction,” Foreign Minister Dr AK Abdul Momen told reporters here..

The Russian flag carrier — Sparta III — was scheduled to dock at Bangladesh’s southwestern Mongla port on December 24 to unload the cargo, but Dhaka denied its docking as the vessel reached its territorial waters in Bay of Bengal.

“It is surprising that Russia changed the name of a ship. We didn’t expect it. Now, we expect Russia to send non-sanctioned ships,” Momen said.

“We don’t want to accept those (Russian) ships which are under (the US) sanctions. We have developed good relations with the US,” he added.