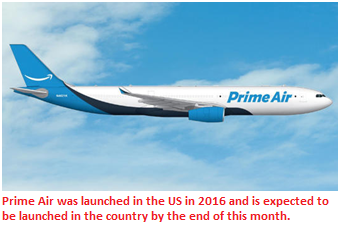 This is the only market outside the US and Europe where the company is launching dedicated air cargo operations, and it will help Amazon increase its logistical presence in the country.

Prime Air will exclusively deliver packages for the company, helping the e-commerce giant create its own overnight delivery network.

QuikJet, a joint venture between AFL and Ireland-based ASL Aviation Group, will operate the airline.