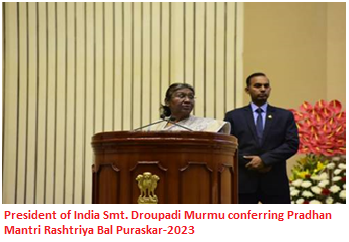 This year the award has been given to 11 children from 11 States/ UTs, representing the diversity of the nation for their exceptional achievements. The awardees of this year include one each in the category of Bravery and Social Service, two in the category of Innovation, three in Sports, and four in Art & Culture. Out of the 11 awardees, 5 are Girls and 6 are boys.

A book on Baal Veer “Young Heroes of India” was also released during the ceremony by Smt. Smriti Zubin Irani, who presented the first copy to the President of India.

Union Minister, Smt. Smriti Zubin Irani while speaking on the occasion said that in line with the vision of giving children a safe and happy environment, the Ministry of Women and Child Development organizes the Pradhan Mantri Bal Puraskar every year to honour children for their outstanding performance in different arenas. This award ceremony is amongst our most treasured occasions as it reflects our commitment to providing children with an atmosphere where they can imbibe good values and principles and become responsible citizens of our country.

Congratulating the awardees, the President of India stated that by conferring the Pradhan Mantri Rashtriya Bal Puraskar 2023 upon the children, we are encouraging and honoring their contribution towards nation-building.

The President of India stated that philanthropy has been given the highest place in India's life values. The life of those who live only for themselves is incomplete. Life is meaningful only for those who live for others.