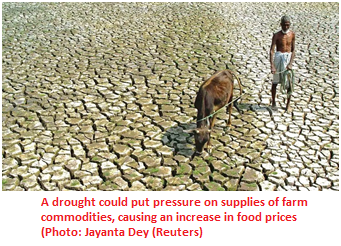 The El Niño phenomenon is likely to impact India’s weather in 2023, affecting the country’s agriculture sector.

The annual monsoon rains are usually the worst-hit by this phenomenon. Considering how important these rains are for its agricultural sector and the overall economy, El Niño is a major cause for worry for India, which is already battling inflation.

“Just how severe El Niño will be and whether it will happen will get clearer by March,” Mrutyunjay Mohapatra, director-general of India meteorological department (IMD), told Business Standard.

If El Niño does take effect, then parts of Delhi, Bihar, Uttar Pradesh, and Chhattisgarh may experience drought-like conditions while central and northwestern India could experience severe heatwaves, the report said.

“Data shows that El Niño has had an overbearing impact on Indian rainfall and 80 per cent of the El Niño years have seen below-normal rains in the country, while others have also been outright drought years,” the newspaper said.

El Nino, therefore, often causes a shortage of agricultural commodities in India, causing food prices to surge in the country.

The monsoon months June-September are crucial for Indian farmers. Nearly 70% of the subcontinent receives rain during this period.

Agriculture, which largely depends on the monsoon, accounts for 20% of India’s GDP. It has a major bearing on inflation in the country.

Food price inflation accounts for nearly 40% of India’s consumer price index (CPI) basket. In December, India’s CPI fell to a one-year low of 5.72%, well within the Reserve Bank of India’s (RBI) comfort range of 2-6%. However, an RBI paper (pdf) released last week noted that inflation may breach the central bank’s upper limit of 6% in the coming months. Any challenges on the supply front could increase volatility in food prices, and in turn food inflation, the paper stated.

Poor rainfall, brought about by El Nino, could bring down the output of commodities like rice, sugar, cereals, pulses and others, creating a shortage and increasing their prices. Besides, the farm sector employs nearly half of India’s workforce. When production falls, it not only fuels commodity prices, it also affects incomes badly.