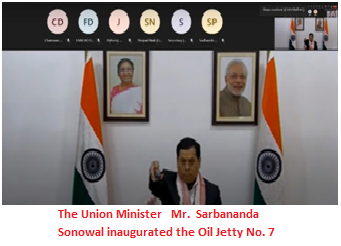 The Union Minister of Ports, Shipping & Waterways and Ayush, SarbanandaSonowal today unveiled a slew of initiatives to ramp up capacity at Kandla port - one of India’s major ports. With an estimated investment of `280 crores, the initiatives will boost capacity at the Kandla port of Deendayal Port Authority.

The Union Minister inaugurated the Oil Jetty No. 7 at Old Kandla which was built with an investment of ` 73.92 crores. This jetty, with a capacity of 2 MMTPA, will enhance the liquid handling capacity of mainly edible oil to satiate the projected requirements. With an augmented capacity to handle cargo, it will bring down the waiting time (pre-berthing detention time) of vessels and other  related assets.

With the inauguration of the jetty, more number of ships will now be accommodated as improved turnaround time will benefit both shipping companies as well as port users. The jetty is T-shaped Jetty with Length of 110 m and Breadth of 12.40 m which can handle the large size of vessel upto 65000 DWT and 13 m depth. This project has led to an indirect employment of around 1000 plus and direct employment of around 250 plus employment opportunities, during the construction phase.

Deendayal Port Authority is the largest liquid handling port in the country. It handles all kinds of liquid bulk i.e. petroleum products, petrochemicals, acids, liquefied gases and vegetable oils. Keeping the future vision and port expansion as well as per the demand of Port Users, DPA has initiated the action for development of land parcel of 554 Acres (225 Ha), in the associated Oil Jetty No. 8 to 11. The land parcel of 554 Acres will be will be utilized for Tank farm development with the Tentative Tankage Capacity of 2.28 million KL. The proposed back-up area will be connected to the Oil Jetties, the piperacks from the jetties will be capable feeding into both the tank farms.

A separate common corridor/Road from LC-236B (New ROB) to 16th CB along railway line will be built for smooth cargo operation of Port and accommodating the existing and up-coming traffic of Cargo berth No. 11 to 17. Phase I of the work is to expected to be completed in 18 months with an estimated cost of Rs.67.00 Cr. The proposed work comprises of Four lane Road having length of 6.5 km with flexible pavement. The dome shaped storage shed has 04 nos. godowns of total 24,000 M2 area with storage capacity of 1.05 lakhs M.T. to be constructed in Phase-II. These 4 godowns of size 200m X 30m to be constructed in place of G-22 & G-23. This proposed godowns are self-supported roofing system type without any intermediate supporting structure between roof & floor, resulting more working height for cargo handling, suitable for bulk cargo through hydraulic system.