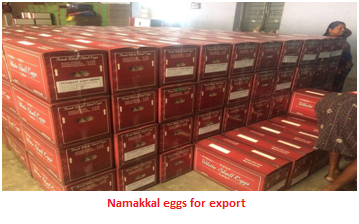 Malaysia has emerged as the new market for Tamil Nadu’s egg exports with a shipment of 8 million eggs in December last year from Namakkal, considered to be egg basket of the country.

With exports surging, the dependence of Namakkal eggs on Kerala market which was dictating the prices, would come down considerably

Industry sources said with the robust demand from Malaysia, India is likely to ship another 10 million eggs each in January and February, 2023 to the south-east Asian country.

Malaysian Minister of Agriculture and Food Security Mohamad Sabu recently visited Namakkal to assess facilities at hatcheries for egg imports to the country.

India exports around 1.5 million eggs daily from Namakkal to mostly Middle east countries including Oman, Qatar, United Arab Emirates, Bahrain and Kuwait. “Opening up of egg exports to Malaysia would give us market access to South-east Asian countries like Singapore Thailand. The eggs were exported using Chennai port while traditionally, Namkal sent shipments through Tuticorin port, which is just 200 kilometers away.

Last month, the Agricultural and Processed Food Products Export Development Authority (APEDA) and the Animal Quarantine and Certification Services (AQCS) expedited the certification process and facilitated ‘first ever trial shipment of eggs’ from Namakkal to Malaysia.  A consignment of 0.1 million eggs were airlifted from the Tiruchirapalli airport last month to Malaysia. Following the approval of Malaysian authorities, 10 containers of eggs (8 million pieces) were shipped last month.

According to an official note, the Malaysian Agriculture and Food Security Minister approached the Indian Embassy at Kuala Lumpur, seeking to import Indian eggs to their country as it faces a shortage of table eggs for the past few months.  “As chicken and eggs are part of their staple food, it is considered as a serious food security issue by the Malaysian Government,” the note stated.

.In Namakkal, around 50-60 million eggs are produced daily by around 1000 layer birds firms and around 3% of eggs produced here are exported. In addition, Namakkal supplies around 12 million eggs daily to Kerala, six million eggs to Tamil Nadu government’s noon meal and rest are supplied to other states

Meanwhile amidst the rising exports of eggs, the eggs prices have witnessed an increase because of domestic demand during the winter months. Inflation in eggs in December, 2022 was reported at 6.91%.