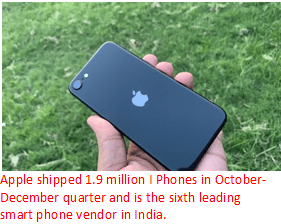 I Phone maker Apple is planning to expand its manufacturing in India from the current 5 to 7 per cent to 25 per cent of its total production, commerce minister Piyush Goyal said.

Amid Covid outbreak in China, the Cupertino-based company, with a market cap of 2.18 trillion US dollars, is looking to increase its manufacturing in India.

On 6 November, Apple announced that the supply of I Phones 14 Pro and I Phone Pro Max models will remain subdued owing to tighter Covid policy in China’s Zhengzhou, which houses the world’s largest I Phone manufacturing facility in the world run by Foxconn. Apple has three contract manufacturers in India - Foxconn Hon Hai, Pegatron in Tamil Nadu and Wistron in Karnataka.

Foxconn, started manufacturing the latest iPhone 14 series in India in September, last year, apparently the same month, it was launched worldwide. Meanwhile, production of I Phone 13 kicked off six months after its global launch. As per reports, Foxconn is also mulling to quadruple the workforce at its Indian I Phone factory near Chennai over a period of two years. Besides this, Pegatron’s unit in Chennai also began making I Phones in India in the month of November.

All the three Apple manufacturers have been chosen for cash incentives under the government’s   Production-linked Incentive (PLI) scheme. As per reports, Apple shipped 1.9 million I Phones in October-December quarter and is the sixth leading smart phone vendor in India.

Foxconn has started manufacturing the latest I Phone 14 series in India in September, last year, the same month it was launched worldwide. Meanwhile, production of I Phone 13 kicked off six months after its global launch.