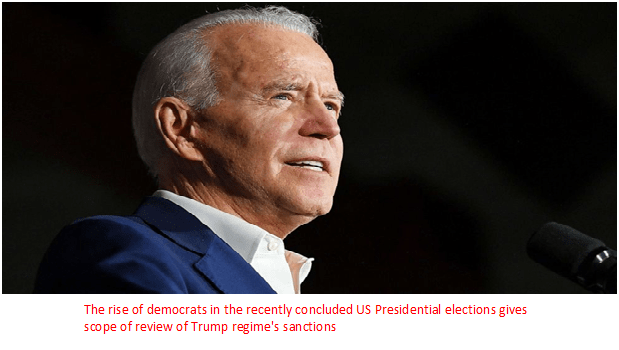 The rise of democrats in the recently concluded US Presidential elections gives scope of review of Trump regime's sanctions against Iran including revival nuclear accord with Iran. These developments though may follow in long term, means bonanza for the terminals India has built at the Chabahar, the facility that would help India to trade with Afghanistan by passing Pakistan besides opening new trade routes to Central Asia

Overall, the imminent regime change is a very positive development for India and Iran

Overall, the imminent regime change is a very positive development for India and Iran, and both the countries look forward to this change to translate into action and further softening towards Iran, according to sources in the shipping ministry. Chabahar port project was the “only bright spot” in India-Iran relations over the past few years, and the “momentum it got should continue”, he said. India has stopped sourcing crude from Iran for the past two years implementing the US ban.

Ever since the terminals built by India were commissioned at Chabahar port, US imposed sanctions against Tehran and disallowed purchase of crude from the Persian gulf country. Though the port was exempted from the purview of sanctions, both the work at the terminals and volumes handled suffered a setback since international suppliers and banks were not willing to back the project.

Shipping industry in the country was looking for a regime change of guard in Washington and now that it has happened it has been a sigh of relief for them. But analysts say it would take long for Biden regime to lift sanctions against Iran as it involved bureacratic hurdles.

“For Chabahar terminals to develop further, we need certain equipment, which neither Iran nor India makes. These are basically from western countries or from South Korea and China and they are reluctant to supply. How comfortable the equipment suppliers are to supply to Iran and how banks view transactions where Iran is involved are the key ithe possues. Banks and suppliers must get comfort that the new regime will not penalise before lending funds for the project

Iranian Port & Marine Services Company (ABI) signed a deal in May 2016 to equip and operate the container and multi-purpose terminals at Shahid Beheshti – Chabahar Port Phase-I – with a capital investment of about one hundred million us dollars.

The first phase of Shahid Behesthi Terminal of Chabahar has been taken over by India Ports Global from December 2018 and is operational. The civil work of entire terminal is over. IPGL is in possession of about 1,400 metres of berth length with 14-16 metres draft.

Since starting operations, Chabahar has handled nearly 20 lakh tonnes of cargo, which includes bulk, container, livestock and general cargo, using the ship’s crane. The full-fledged operation is waiting for erection of quay cranes for loading and unloading cargo.