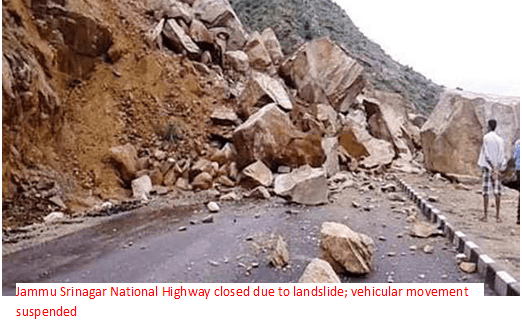 The Kashmir valley remained cut off from other parts of the country when the vehicular movement got suspended on the Srinagar Jammu National Highway due to landslides at Shabanbas Banihal during the early hours of March third.

"Srinagar-Jammu National Highway is blocked since 3 hours on March third due to a landslide at Shabanbas Banihal. One oil tanker is stuck at the site and the restoration work is underway,"  according to the state Disaster Management Authority.

A fresh feeble Western Disturbance as a cyclonic circulation lies over Jammu and Kashmir and neighbourhood in lower tropospheric levels according to the local met office. "Under its influence, isolated rainfall and snowfall over Jammu, Kashmir, Ladakh, Gilgit, Baltistan, Muzaffarabad, Himachal Pradesh and Uttarakhand on March 3 and 4.id.