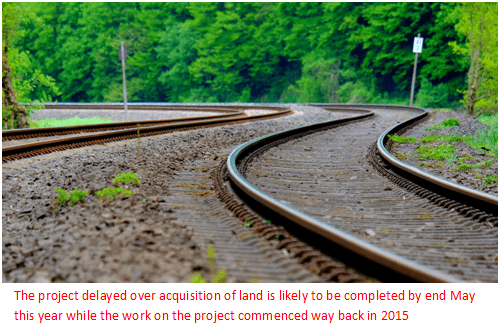 No other railway zone can compete with the Southern Railways construction in wing on inordinate delays in completing infrastructure projects. Yet another record was created wehn the construction wing has taken nearly seven years to complete the 29 kilometer third line between Chennai's southern suburb Tambaram with Chengelpet.

The 29-km third line will not only increase track capacity by 25 per cent, but would also reduce the halt time of trains arriving from Southern districts of the State en route to Egmore. It will help to press into service more suburban trains between Tambaram and Chengelpet.

media reports said the work on the Guduvancheri-Chengalpattu (18 kms) stretch had been completed and commissioned. Works for laying the 11 km portion from Tambaram to Guduvancheri is progressing fast and is in the final stage. “We have formed the embankment between Tambaram and Guduvancheri and tracks are being positioned on it. Overhead lines and power poles have been erected.

Platform-building works are being carried out at Perungalathur, Vandalur and Urapakkam,” Wor on of the 29-km third line was approved after a prolonged delay the railway board for several years.

The actual work began in 2015 at a cost of Rs 256 crore. Although railways planned to complete the works by 2017, it was delayed owing to land acquisition issues. Issues in land acquisition were resolved last year.

Once completed, the new line will be inspected by the Commissioner of Railway Safety by June or July, and subsequently the line will be thrown open for traffic.

Southern Railway and the projects of the state have not received priority of the railway board for several years. If one or 2 projects get cleared, alloction of funds are usually meagre that it takes decades to complete. Even these one two sanctioned projects face serious land acquisition issues in Tamil nadu even after the government had substantially hiked the compensation rates in the last few years. No one wants to part with the land in the state for the public project said a former official of the railways.