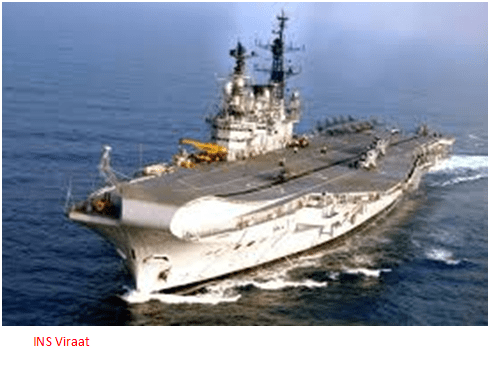 The decommissioned aircraft carrier of the navy INS Virat will go

The Supreme Court on April 12th dismissed a plea of a private firm seeking preservation of India's decommissioned aircraft carrier 'Viraat' and its conversion into a museum.

A bench of Chief Justice S A Bobde and Justices A S Bopanna and V Ramasubramanian took note of the fact that the Defense Ministry  has refused to accept the representation of private firm Envitech Marine Consultants Pvt Ltd that the decommissioned aircraft carrier be preserved.You cannot do this. The (Bombay) high court had allowed you to give representation to the government. You did it. The government (Ministry of Defence) dismissed it. You did not challenge it," the bench said.

In the proceedings conducted through video conferencing, the bench refused to accept submissions of Rupali Sharma, representative of Envitech Marine, that this is a "national treasury" and needed to be saved.

The counsel for the firm which had bought the ship  said, "they had approached the Ministry of Defence. Ministry says no. The matter ends. The petition has to be disposed of."

Earlier on April 5, the apex court had asked the petitioner firm to file its response on the report of status of dismantling of the warship. The centaur-class aircraft carrier, INS Viraat, was in service with the Indian Navy for 29 years before being decommissioned in March 2017.

'Viraat' had reached the Alang ship breaking yard in Gujarat from Mumbai in September last year and the dismantling process was going on.

Another private firm Shree Ram Group at Alang in Bhavnagar district of Gujarat has bought Viraat at an auction in July last year for Rs 38.54 crore and began the dismantling process in December last year.

The bench, after perusing the report on the status of dismantling of 'Viraat', had asked the private firm Envitech Marine Consultants Pvt Ltd if 40 per cent of the warship has been dismantled after a valid purchase by another company, then why does it want to take it for making a museum.

On February 10, the top court had ordered status quo on dismantling of 'Viraat' and sought responses from the Centre and Shree Ram Group on the plea of Envitech Marine, which has offered to pay Rs 100 crore for the ship, so that it can be converted into a museum.

The Centre had in July 2019 informed Parliament that the decision to scrap Viraat was taken after due consultation with the Indian Navy.