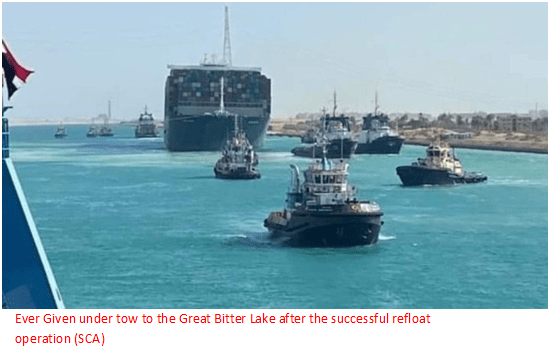 SCA: Egypt Will Hold Ever Given Until Damage Claim is Resolved

The container ship Ever Given is still anchored in Egypt's Great Bitter Lake, weeks after salvors freed her from the banks of the Suez Canal - and she may not be leaving soon. The Suez Canal Authority's top official told a local TV station last week that the vessel will stay put until Egypt's massive claim for financial damages is resolved.

The minute they agree to compensation, the vessel will be allowed to move says SCA head Lt. Gen. Osama Rabie

"The vessel will remain here until investigations are complete and compensation is paid," said SCA head Lt. Gen. Osama Rabie, according to the Wall Street Journal. "We hope for a speedy agreement [and] the minute they agree to compensation, the vessel will be allowed to move."

Rabie said that Egypt will seek $1 billion in compensation from the shipowner for the incident. According to Refinitiv, the SCA lost less than one tenth of that amount in canal transit fees over the course of the six day period that the boxship was grounded. The cost of the salvage has not been disclosed, but it would have to cover the efforts of two dredgers, a dozen tugs of varying sizes, fees for the professional salvor, and wages and overtime for an Egyptian workforce numbering in the hundreds.

After the grounding, the canal authority is contemplating modifications to its physical operations, potentially including larger salvage tugs, bigger cranes and the widening of the narrow southern section of the canal. However, the SCA denies that it bears any responsibility for the grounding. In a recent interview with Kyodo News, Lt. Gen. Rabie speculated that the vessel's master may be to blame, though he did not provide evidence.

“Maybe the captain made a mistake in a specific request, such as the rudder or speed, which could have led to that,” Rabie said. He denied that the SCA-employed pilots who sail with every ship through the canal could bear responsibility. “Even when orders are issued by the guide [pilot], the captain has the right to change them or use any route or speed other than what the guide says  . . . There was no error or responsibility on the part of the [SCA]," he said.

Egyptian investigators have retrieved data from the Ever Given's VDR and are in the process of examining the evidence. The crew has also been interviewed by officials, and they remain on board the ship.