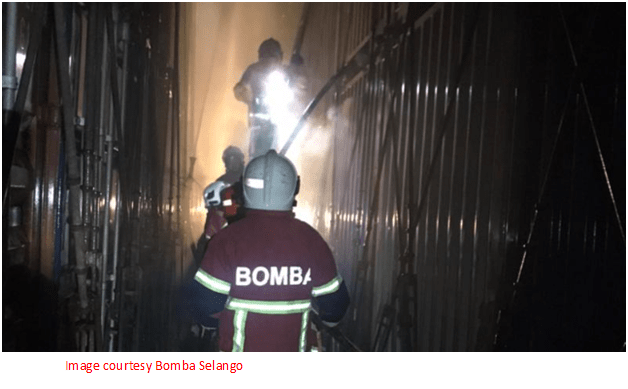 Firefighters have been working for days to put out a container fire aboard the boxship Interasia Catalyst off Port Klang, Malaysia.

On April 7, shortly after the Catalyst set sail from Port Klang to the port of Cochin, Kerala, her crew spotted smoke coming from several of the containers on deck

On April 7, shortly after the Catalyst set sail from Port Klang to the port of Cochin, Kerala, her crew spotted smoke coming from several of the containers on deck. The ship returned to an anchorage just off Port Klang, and local firefighting teams responded to the scene.

From an initial five containers, the fire expanded to an additional six boxes. Five containers have been extinguished as of April 11, and cooling and firefightinng efforts are ongoing. Three affected containers are carrying the oxidizing agent sodium carbonate peroxyhydrate, a common peroxide ingredient in laundry detergents, and cooling efforts have focused on these cargoes.

Nearly 50 firefighters from local departments, the Naval Special Forces and the Malaysian Maritime Enforcement Agency (MMEA) are involved in the ongoing effort, according to officials.

Interasia Catalyst is a 2009-built Panamax boxship with a capacity of 4,200 TEU. She is owned by a Singaporean company and flagged in Singapore.

Container fires are a major challenge for boxship owners and insurers

Container fires are a major challenge for boxship owners and insurers. According to TT Club, the incidence rate of container fires in the global fleet may be as high as one a week, with more serious fires occuring several times a year. In the first half of 2019 alone, six major boxship fires were reported, including one that resulted in a sinking.

The insurance industry is particularly concerned about the risk of a container fire aboard an ultra-large boxship like the ill-fated Maersk Honam. "Fire-fighting capabilities on board have not necessarily kept pace with the increasing vessel sizes. [Ultra-large container vessels] provide economies of scale for shipping companies but the industry needs to make sure that risk management and safety standards are brought up to speed," cautions Allianz.