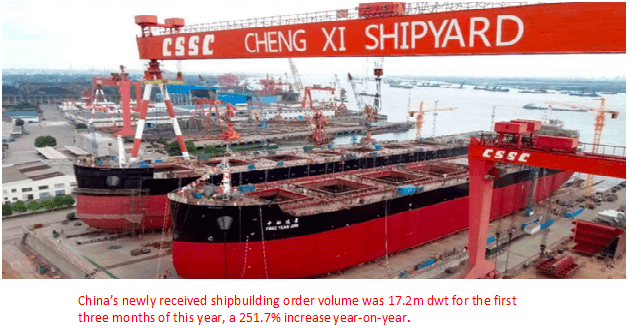 According to the statistics released by China Association of the National Shipbuilding Industry (CANSI), China’s shipbuilding output for the first quarter was 9.79m dwt, an increase of 39.8%. As at the end of March, the orderbook on hand was 78.48m dwt, a drop of 1.4%.

Shipbuilding export volume, new orders for export and export orders on hand accounted for 92.9%, 85.4% and 88.5% of national volume, respectively.

As at end of March, China’s shipbuilding output, newly received orders and orders on hand accounted for 43.4%, 47.4% and 44.6%, respectively of the global shipbuilding market share.

Fifteen major Chinese ship repair yards completed a repair volume of 777 vessels for the first three months, an increase of 22.9% year on year.