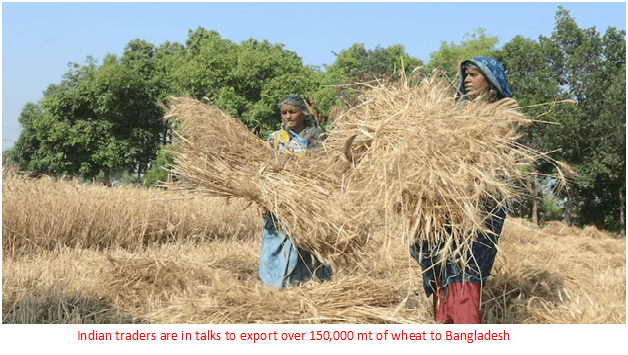 Notwithstanding the havoc caused by the corona infections in certain parts of India, the country is all set to export around Two Lakh metric tons of wheat to neighboring Bangladesh and Nepal involving a huge road and railway transportation.

Indian traders are in talks to export over 150,000 mt of wheat to Bangladesh

Indian traders are in talks to export over 150,000 mt of wheat to Bangladesh and around 50,000 mt to Nepal over the next few months, trade sources were quoted by international media reports.

However, the average export prices for wheat are seen rising 10 per cent from last year as the domestic prices firmed up amid tightening of supplies following government procurement in a bid way to tide over the requirment of domstic demand

Along with the likely rise in prices of foodgrains, their exports are also seen declining in 2021-22 marketing year.

For the 2021-22 marketing year, the US Department of Agriculture has estimated India’s wheat exports at 2.2 million mt against 2.3 million mt seen in the previous year. The wheat marketing year runs from April through March.

India, the world’s second-largest wheat producer, is in a position to export significant quantities after several years at a time when global inventories are at two-year lows.

Exports became viable for India as Russian supplies were limited following the announcement of export quota and floating tax,

So far, the Food Corp. of India procured around 34.8 million mt of wheat, nearly 34% higher over the year. “ FCI has so far procured nearly 32 per cent of India’s overall output  in the current year, data showed. India is expected to harvest 109.2 million mt of wheat and the government has pegged overall wheat procurement at 42.7 million mt.

With the procurement increasing sharply this year, the average export prices from India are seen going up by nearly 10 per cent.