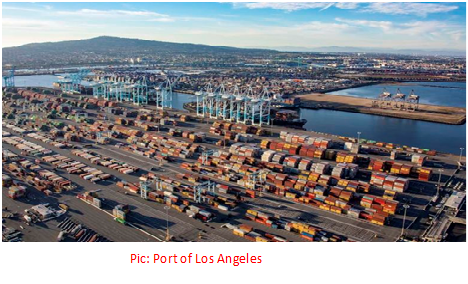 Calls are growing in the US for federal funding to create transparent data to align supply chain movements in a bid to ensure America is not inflicted again with the container chaos that has plagued importers and exporters over the past year.

Gene Seroka, the head of the Port of Los Angeles, said yesterday he will ask the Joe Biden administration to fund a nationwide information sharing system to align port, truck and rail services with shipping line schedules to match the best path of travel for goods as they come and go.

The scramble for empty containers continues

“The scramble for empty containers continues,” Seroka said at a press briefing yesterday. “There are plenty of containers. They’re just not in the right location.” This is largely down to the record imbalance between imports and exports.

While the majority of imports coming through the Port of Los Angeles go to major metropolitan areas, most of the nation’s exports come from rural America. Trying to move a container from Chicago to North Idaho and back to the west coast is “a high-wire act,” Seroka said.

The FMC’s Maffei said yesterday, “If anything could have lessened the problems created by this huge import boom, it would have been to have information flowing more accurately and quicker. If people know when ships are coming in and loaded, if all the lines and ports and terminals disclosed all this information, it’s good for the entire system. That’s the one thing that would have helped the system keep up.”

The continent’s comparatively slow handling of containers has long been a source of supply chain pain and a leading cause of empty container shortages in Asia, but never to the extent recorded today.